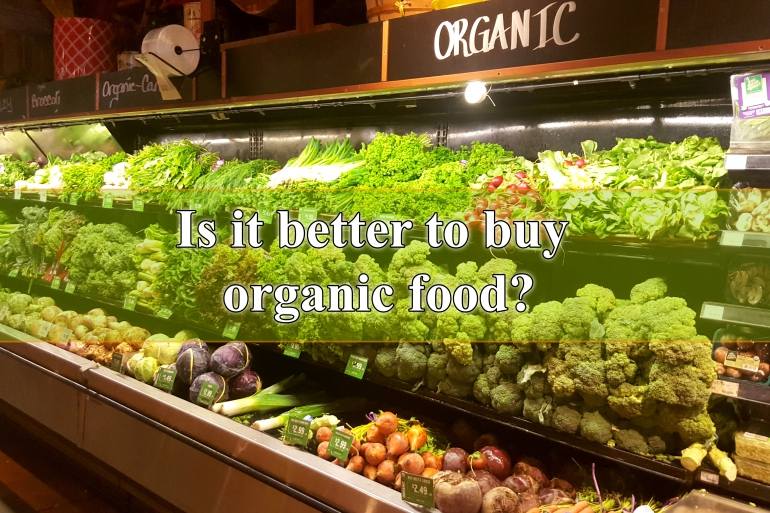 Is it better to buy organic food?

Organic products is the basis of healthy way of life, healthy diet, improve immunity and prolong our lives.

Nowadays people are quite familiar with such terms as “pesticides”, “flavor enhancers”, “color additives” and frightening “GMO”. Thanks to these and some other achievements of the chemical production the humanity managed to gather higher harvests as well eat something that was considered as inedible earlier. Current methods of treating and packaging nutrition products allow their keeping for months. Of course, the quality of such food was changed and, frankly speaking, its quality deteriorated.

WE ARE WHAT WE EAT

Organic food that we increasingly see on the shelves of supermarkets and specialized stores can’t be regarded as the results of progress. They are like something that was about 50 years ago, when people used to take only organic and natural food.

Let’s take a cucumber as an example. Yes, that juicy and crispy vegetable lying in your fridge right now. At least once you happened to see flabby cucumbers which looked more like grass, they do not have any taste or scent. I clearly felt this difference between organic and supermarket cucumbers, when I bought bio cucumbers for the first time. Their taste was terrific, but I forgot their actual taste, and that was the most awful thing!

On the condition that a cucumber grows faster than it has to, it does get enough time to take everything necessary from the soil.  Don’t forget that it was taken half-ripen and, additionally, sprayed to keep its marketable appearance. Finally, even if the product has its normal taste, its nutrition value is under a great question.

It goes without saying, bio cucumbers and cucumbers from your garden bed will taste differently, as the former are taken when they are not completely ripened. But you will surely know that they were not sprayed and “fertilized” with a great number of growth enhancers.

Of the greatest trouble is the situation with meat. Everybody knows that while growing pigs, a lot of antibiotics are used. It is not so bad if they were used to treat sick animals, but they are added into common food as preventive measures against diseases. Would you like to eat pork, knowing that you will get everything this pig has eaten including antibiotics? I don’t think so.

Definitely, antibiotics are employed in bioproduction, too. But they are used exactly if necessary, they are only for sick animals.

How to distinguish THE BAD FROM THE GOOD?

Selling organic food is quite common in European and American supermarkets. Some stores sell them in special departments, but mainly, they are placed in common space. Organic products have appropriate labels, for example, such food have a green label “Bio” in Switzerland and Germany. If the first number of the product code is 9 in the USA (usual products have 4), it means this product is organic.

Moreover, there is an option to order everything necessary through the Internet.

Is it worth buying organic food? No doubts, yes! This production costs much more than that one from a supermarket. But you will save your money, finally. Why? Buying bioproducts you invest in your own health. Your health directly depends on the quality of food you take, whether you will go to your doctor and spend a lot of money on drugs in future. So, eat and keep fit, consciously overpaying for your food.

I Wish You All to be healthy!

You are already subscribed

Thank you for signing up. You are awesome!

There is just one more step. Before I can send your FREE guide, you must confirm your subscription.

Please confirm your subscription clicking the link sent to your email address (please check also your Junk and Spam folders).

If you use Gmail, make sure to check your “Promotions” tab.

Enjoy your guide… Love yourself enough to live a healthy lifestyle.